When using roach baits, many people unknowingly make at least one of these three mistakes. These mistakes waste time & money, or they are hazardous to children and pets.

The first mistake many people make when working with baits is using it in combination with contact killers. If you don’t know what they are, read the next section below. I explain a little more about it there.

Don’t misunderstand though. Contact killers, like Demon Max, work very well. They just don’t work well with roach baits. In fact, they may completely stop the much sought after domino effect roach baits are known for.

So what you want to do is avoid using contact killer completely when using cockroach baits, like Advion Syngenta.

A contact killer is a pesticide that will kill any cockroach that makes contact with it. These are generally sprays. Once contact is made, they usually kill the affected insect very quickly. A common and popular active ingredient used for contact killers is cypermethrin.

Why are they bad again? 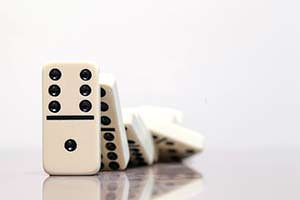 They sound like they work great! Yes, they do. Cypher WP and the likes are incredible roach killers. However, they kill too quickly; which interferes with the domino effects of baits. The domino effect is when a cockroach gets poisoned and it ends up killing another cockroach (or in most cases, multiple cockroaches).

Cockroaches will eat the feces of other cockroaches, so that’s one way it spreads the poison to others. Younger roaches that are unable to eat larger and harder foods love to feed on adult feces.

Besides canceling out the domino effect, sprays will also contaminate the baits. Often times they will ruin the attractant and even end up deterring roaches from eating the bait entirely. So if you’re using the highly recommended Advion Roach Bait, don’t spray a contact killer. Wondering why Advion is so highly recommended? I’ve written a very thorough review of it here, so make sure you go and read the Advion review.

Thinking Plastic Bait Stations Are Safe Around Children and Pets

This mistake applies to bait stations, and it’s not what you are thinking. You’re probably thinking it’s the pesticide that’s hazardous to young children and pets. However, it’s not the pesticide. Your loved ones will have to ingest a much larger amount than what’s contained in one bait station for it to be hazardous. You should still keep them away because it’s not good to be ingesting any of this stuff. At the end of they day, they’re still poison used to kill roaches and other pests.

What is it then? It’s actually the plastic housing commonly found in products like these Combat Roach Baits. It can easily break into smaller parts and become a serious choking hazard. Pets and kids can chew on it and choke from the pieces that break off.

The best thing to do when using bait stations is to place them in areas where kids and pets can’t reach them or gain access to them. Even better, don’t even let them see the bait stations. I actually prefer to use gel baits instead of bait stations. They’re easier to hide and can be applied in places that are much harder for kids and pets to reach.

Placing Them in the Wrong Area

All roach baits are mixed with an attractant to grab attention, but it’s kind of useless if it’s placed in the wrong spot. Sure they have a powerful sense of smell and will probably notice it. However, why go all the way across the room when there’s something just as good closer by? Why waste time and energy to check something somewhere different when food is guaranteed at a closer location?

The truth is there’s no good reason why a cockroach will go out of their way when food is readily available nearby. You need to place baits and other roach killing solutions in the right places. You need to place the baits in areas they frequently visit. If it’s right by and it smells good, there’s a much higher chance they’ll go check it out. If you don’t know where these right places are, you need to place monitor traps to see where you catch the most of them.